OK well with 11 days left to go now I thought I would share how the vyper is looking, I have been painting it unassembled for ease of access. I thought I hadn't made much progress on it but once I put together everything I had done I was surprised how much is done. The weapon is still only undercoated (I am going to paint up the starcannon and scatter laser for it) and the rear gunner just needs the yellow done for his helmet and the gems highlighting. I will prob add a yellow go faster stripe to is as well so it matches the bikes 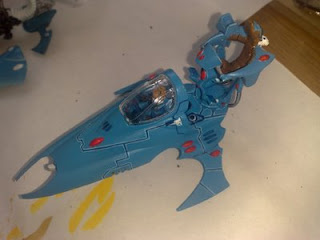 Have finally started on the farseer conversion. At the moment it just stands as the Autarch from the Windrider host box I bought to start this off. He has been beheaded and I am trying to green stuff a farseer head out of a warhammer fantasy high elf mage head but it isn't going so well. I think I will end up buying a farseer and hacking him up for bits. Still time is of the essence so whatever I do I need to do it fast. I have started on his bike however. I wanted him to really stand out so have gone for about the hardest colour there is to paint....yellow. So far I have highlighted up in stages the bike so it is nearly done. I am then prob going to freehand some sort of design or detail onto the front but I need to sit down and do some sketches first. Anyway wip below of the highlighted yellow (again big shout out to all Imperial Fist players....yellow is not fun!) 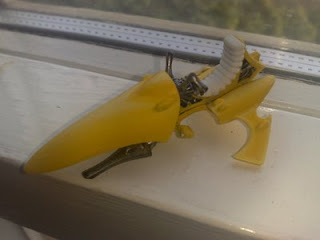