OK not updated for a couple of days so here is the latest. Not a great deal of movement overall although I have finished the first stages of edge highlighting on each of my first squad of riders. I am going to give them a second minimal extreme highlight probably over the weekend. Last night I had a crack at highlighting the jetbike bodies. Well that was a challenge. I had played around on my tested with highlighting up from the bottom but it didn't really look right. Then after taking a photo which was posted in an earlier entry it was clear that it didn't really look right as that is not where light would naturally fall on a domed surface. Therefore I decided to highlight up through the middle of the bike itself. This required several shades of highlights with a rough attempt at blending them into each other. I am not entirely happy with the results but I have not really looked at them in proper light yet so I might change my mind. Anyway...photos here to see my efforts. You can hopefully pick out the colour transition up the middle of the front engine dome. 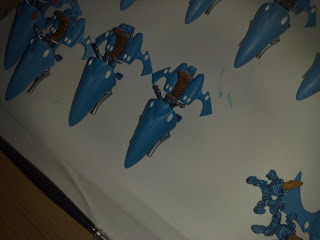 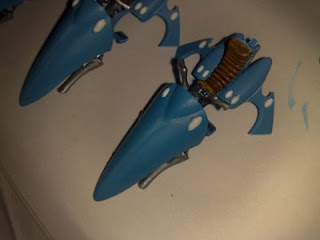