OK well after last months stumble at the finishing line there are 500 points to paint this month to bring us up to 1500 points. At the moment my 1,000 list is roughly
Farseer + toys
5 Man seer council
2 x 6 Jetbike Squads
6 Fire Dragons mounted in Wave Serpent.
For 1,500 points I want something that should be competitive in tournaments so some careful thinking has been had and I have made a decision to drop the harlequins I was originally thinking about. In a mech list I just cannot find a way of making them work. The test games I have played with them they have been mown down before really having a chance to do anything even with a shadowseer. So after a rethink and some list bashing for my last 500 points I have come up with
10x Dire Avengers mounted in Wave serpent
8x Banshees mounted in wave serpent.
The Dire avengers give me that much needed 3rd troop choice and the banshees give me some nice close assault options. I ummed and ahhed between banshees and scorpions and settled on the banshees on the basis that I am playing necrons so combined with Doom hopefully they will go through those undead metal fiends like the proverbial hot knife through butter but we shall see.
In the mean time outside of my 1,500 point list I have started to paint my Eldrad model to fit the theme of my (as yet unnamed) craftworld. 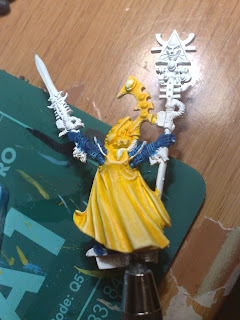 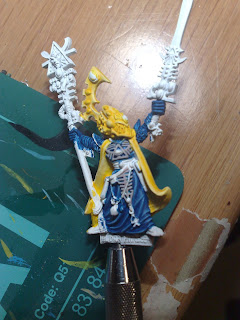