Well it has been a manic few months clearing lots of projects with little updates here for which I apologise. Last bits done on 40 dark angel tac marines before I start on a Stormclaw commission which I am very excited about!
Excuse the iphone pics, after a hobby room reorg, I haven't had time to set up the light tent yet. 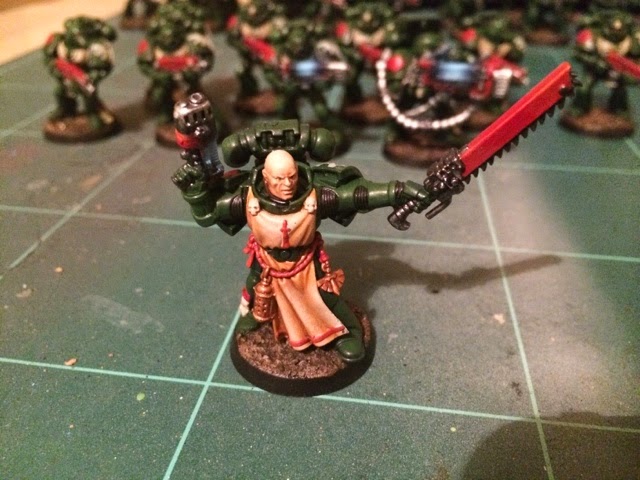 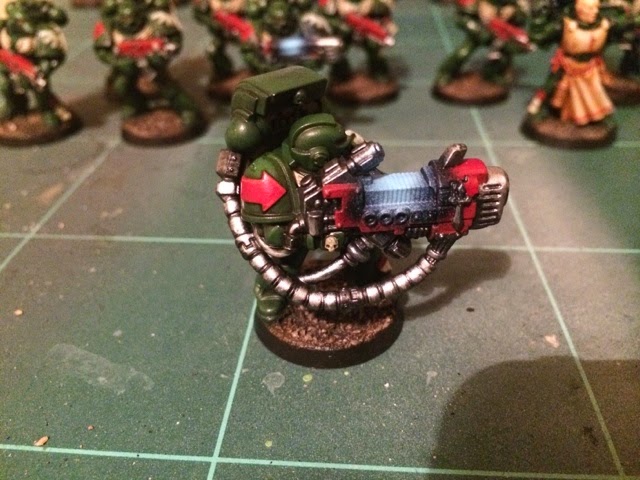 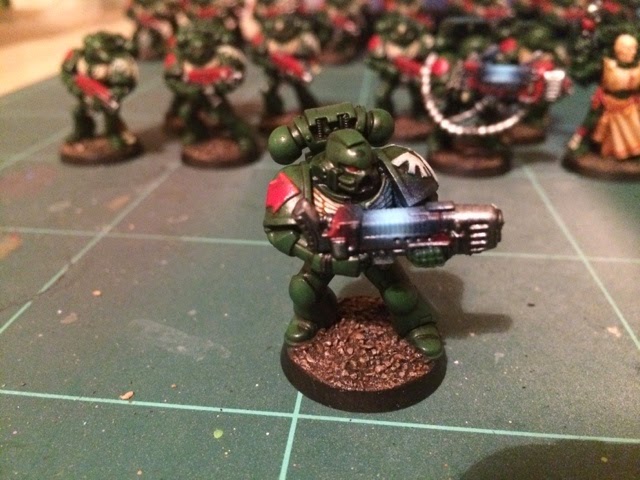 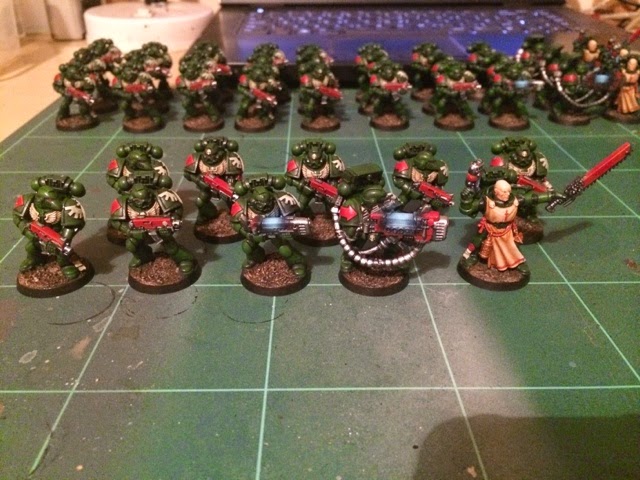 So what have I been up to recently?

Well after purchasing the full range of Minitaire paints I found myself with no actual room to hobby anymore. 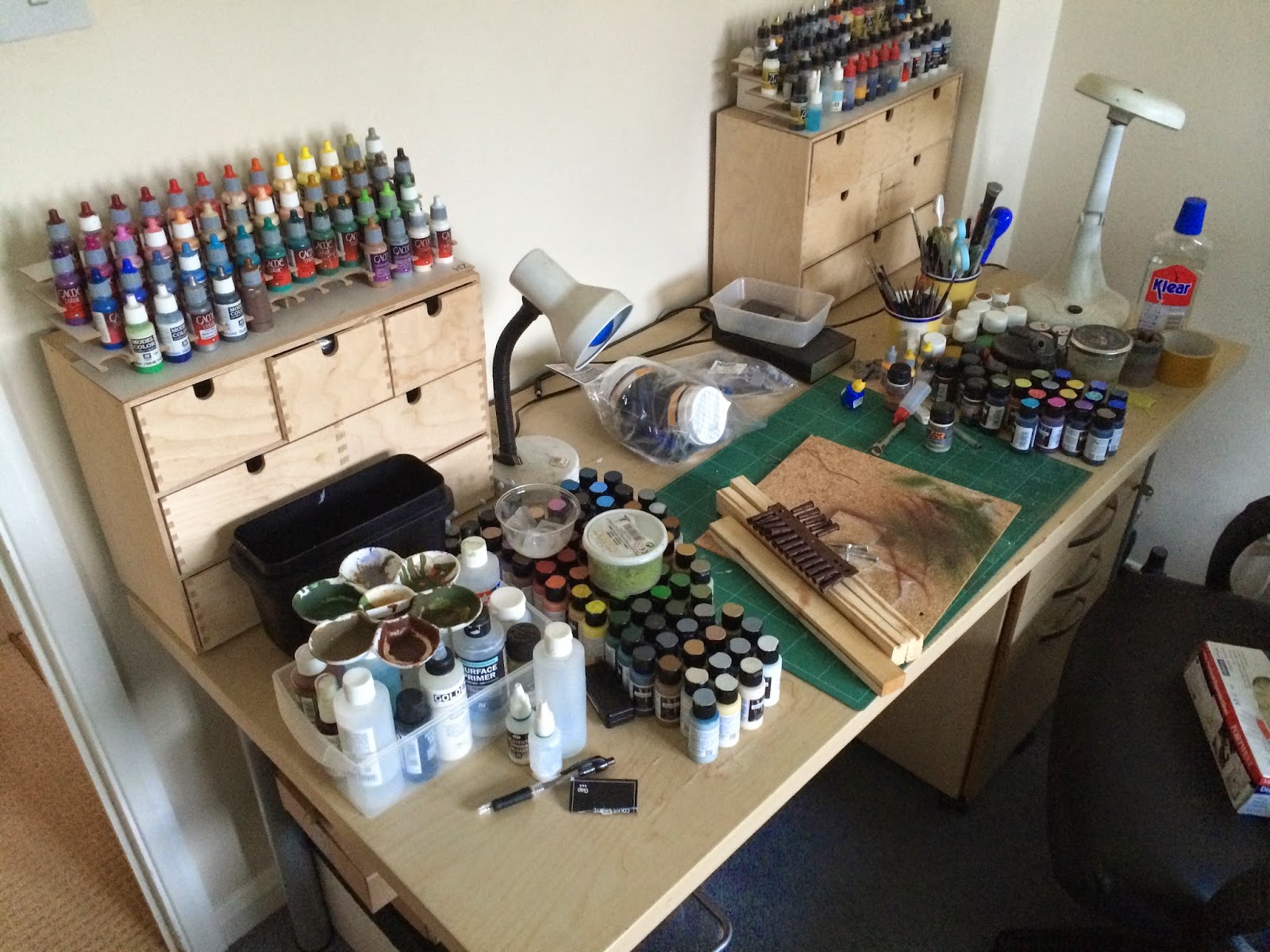 Queue the A-Team theme tune, some lengths of 2cm thick pine and some power tools! 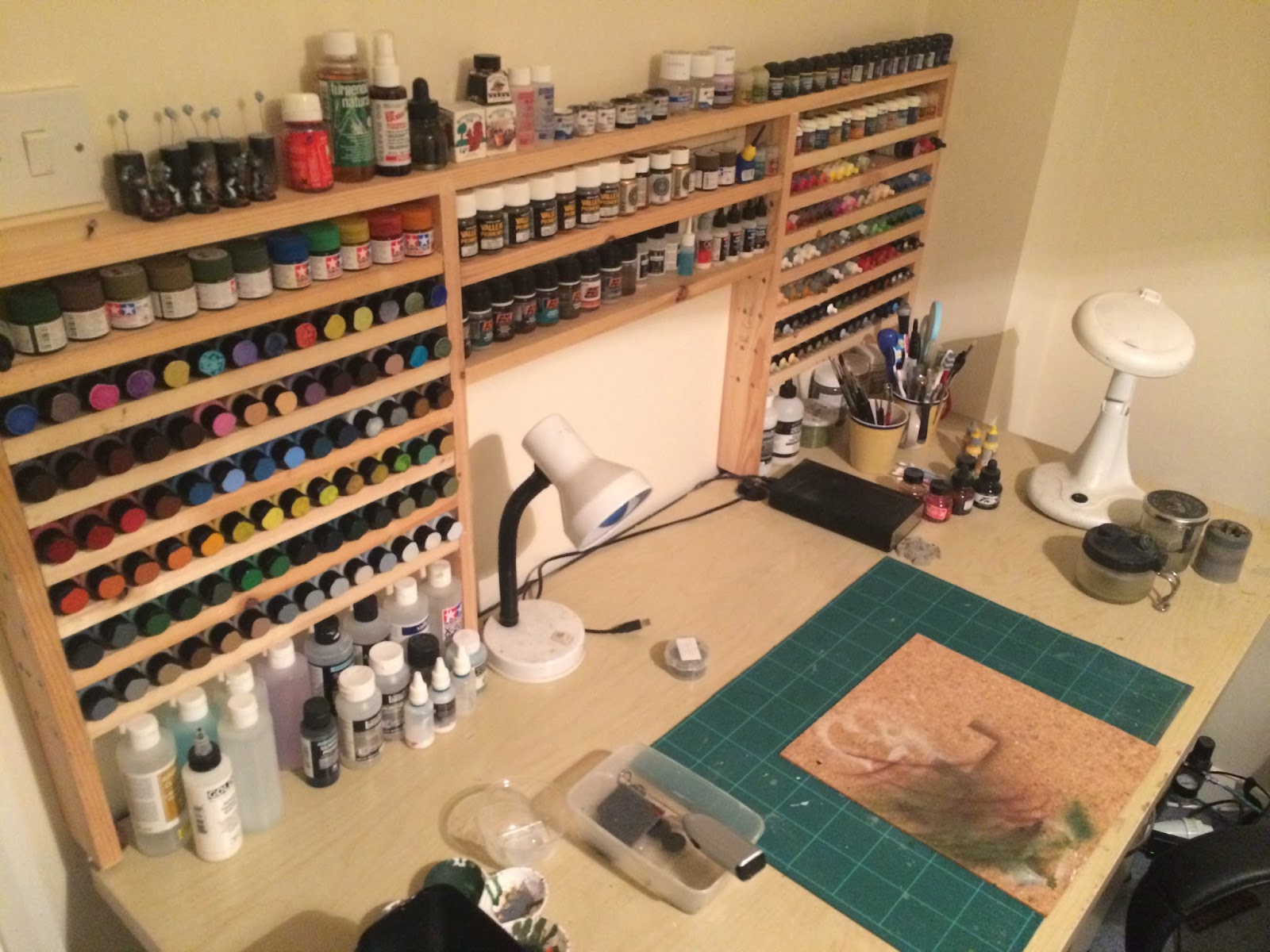 Since then I have been moving on with my Death Guard/ Nurgle themed Chaos Space Marine list for the Independent Characters hobby progress challenge.

I'm currently working on the obliterators, taking the Finecast sculpts and getting them less Black Legiony by removing the iconography which will be replaced with greenstuffed nurgle/death guard iconography. 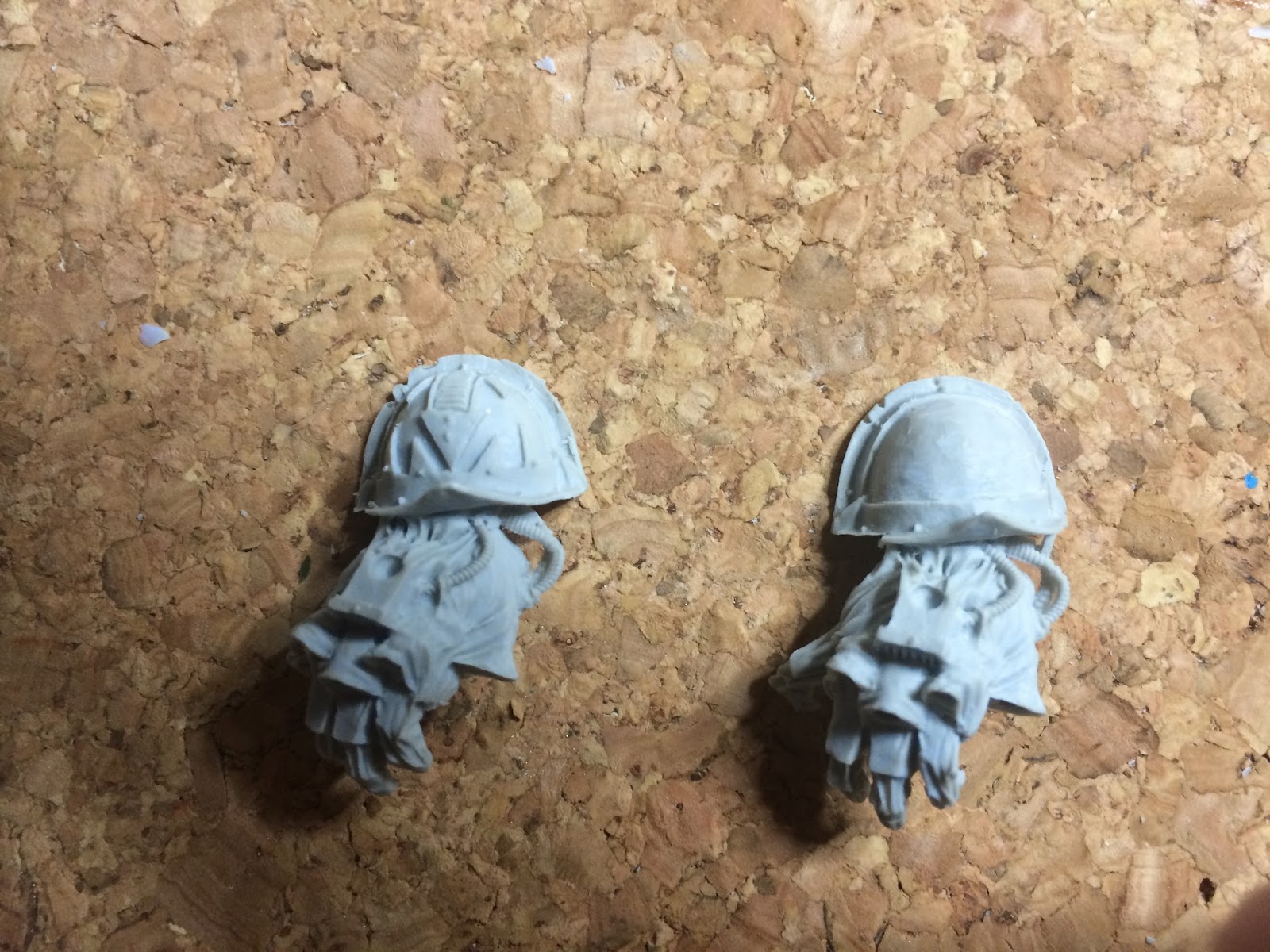 Apologies for the poor photo. Getting the light right with the iPad using an iPhone was somewhat of a challenge!

More purchases for my Nurgle Speees mehrens! Some obliterators (all three are perfect casts which is nice) and some cadian's to convert into plague zombies. The box of zombies is inbound....ie waiting for Col Gravis to drop them round! 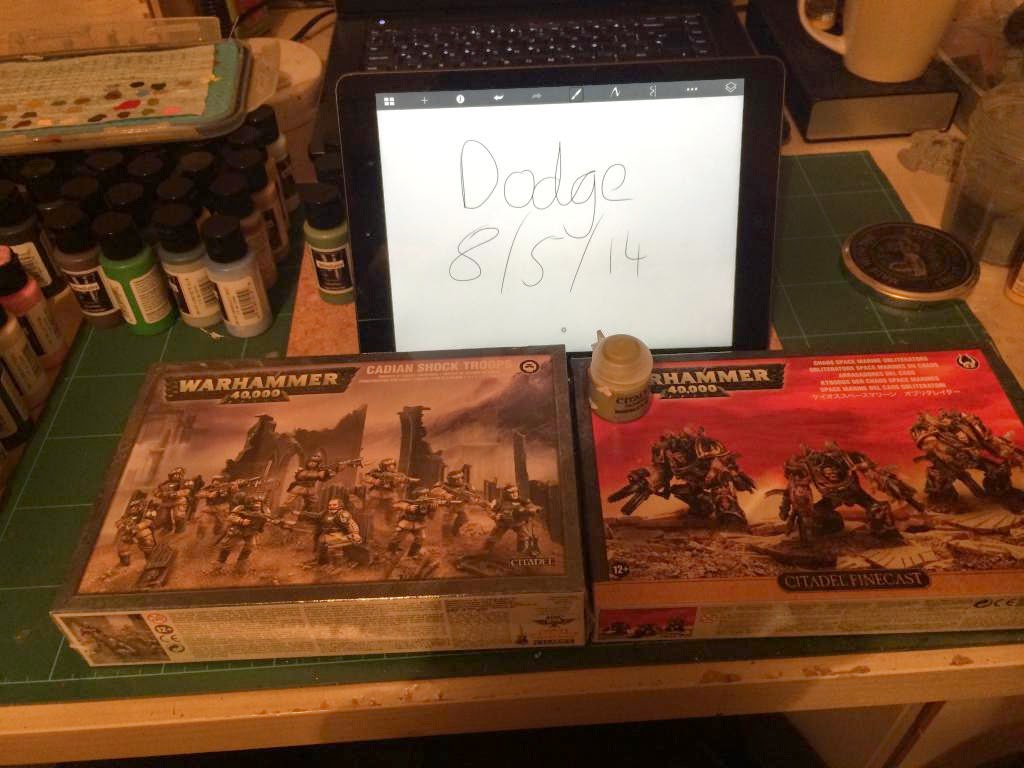 Everything is coming together nicely. Finding myself really energised by the prospect of the new edition dropping! I didn't play a lot in 6th, not through any feelings towards the rule set, only because of time and money with a new born.
Posted by Dodge at 11:04 No comments:

Having used their tints before and been very impressed, I've splashed out on full set of Badger Minitaire Paints. Really looking forward to using them on my Nurgle Hobby Progress Challenge army!
Posted by Dodge at 08:51 No comments: 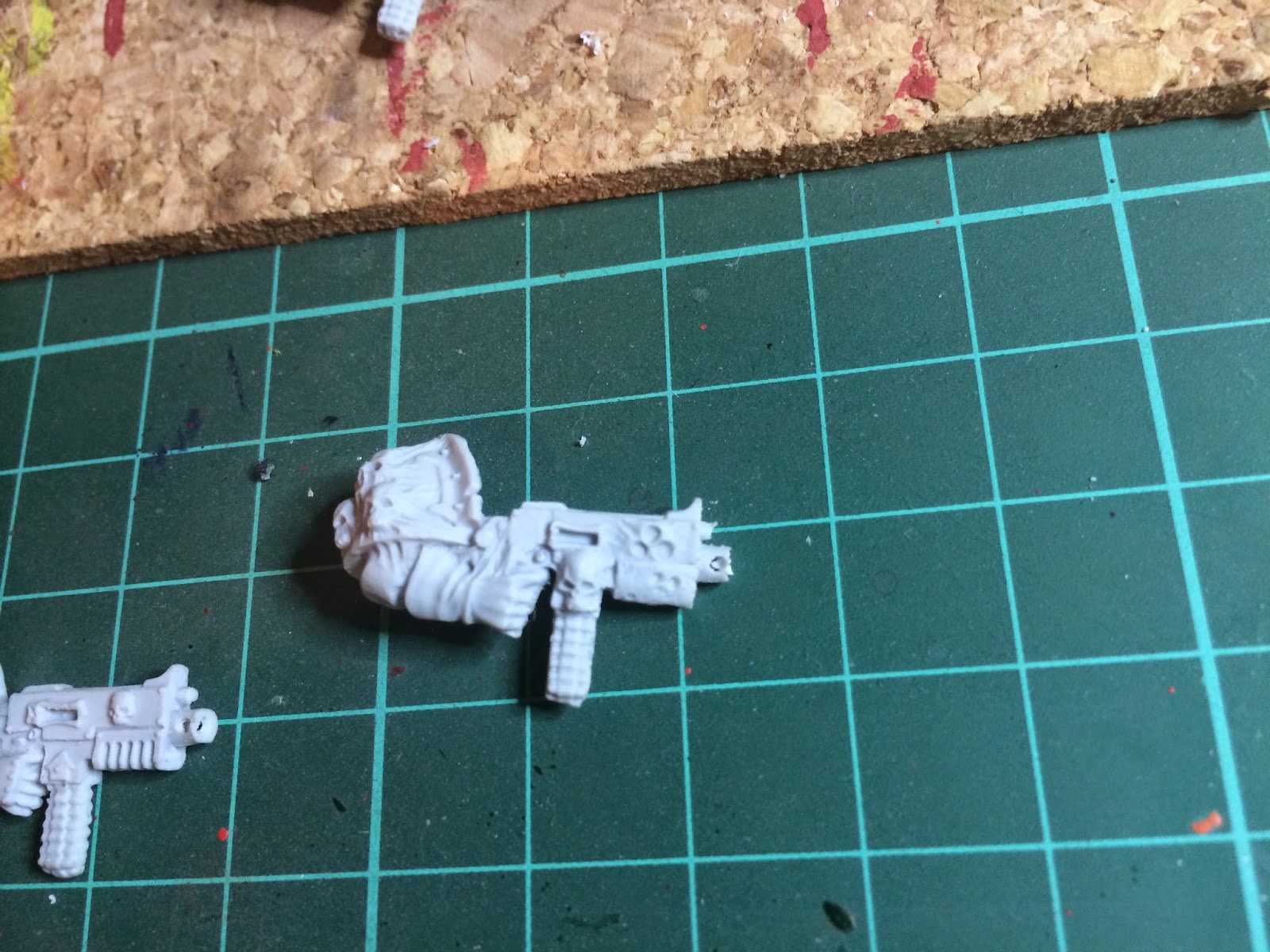 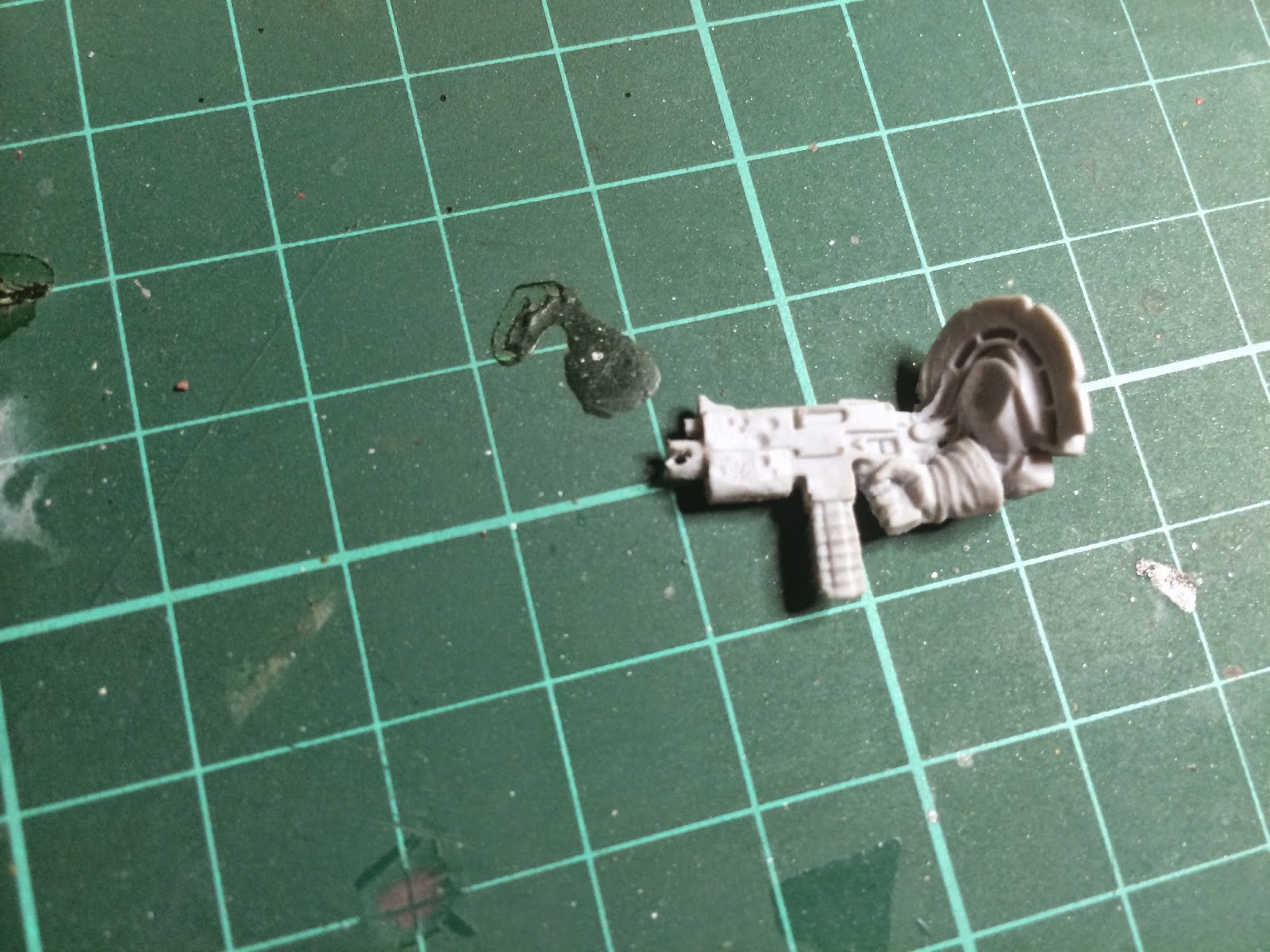 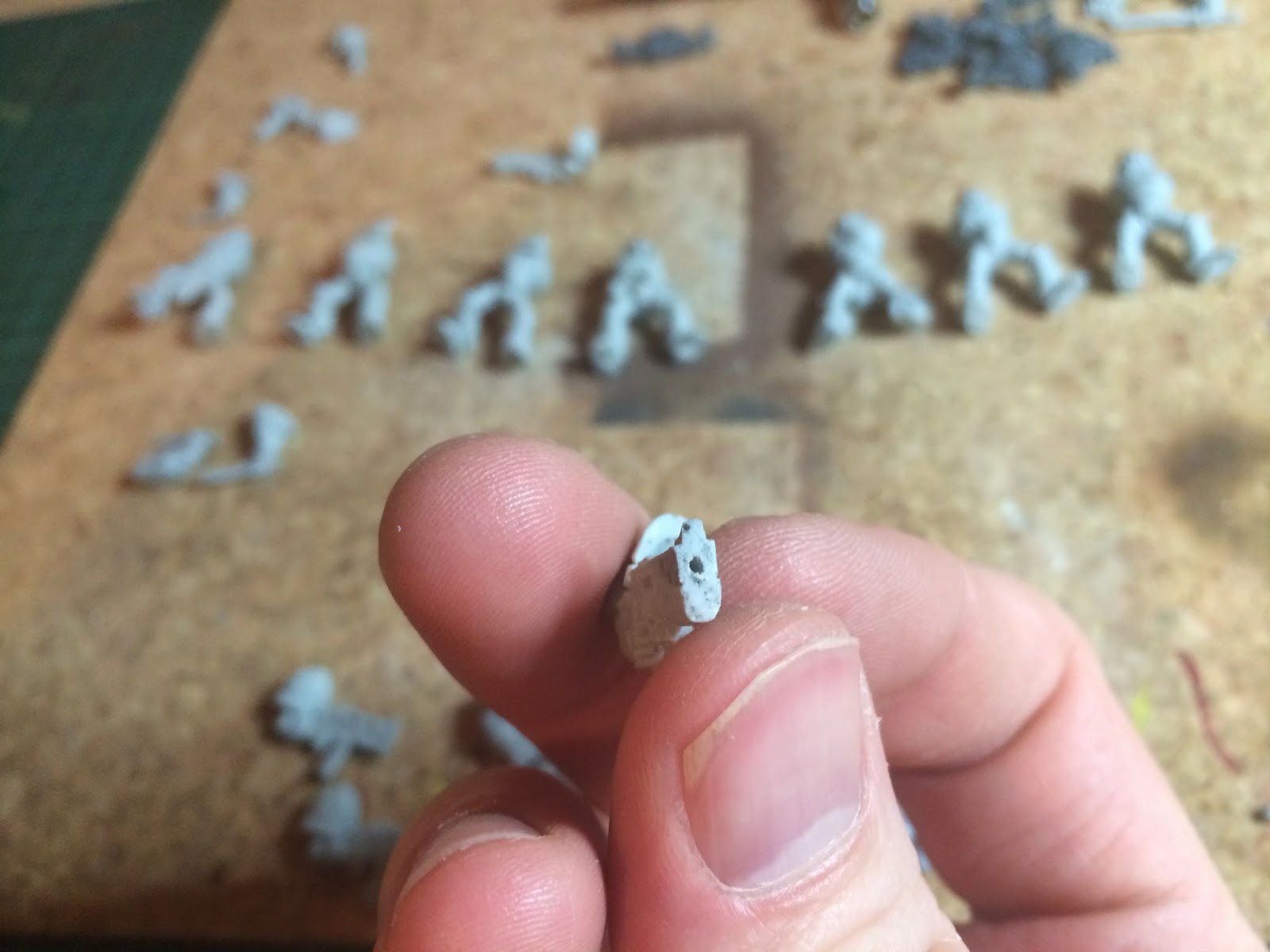 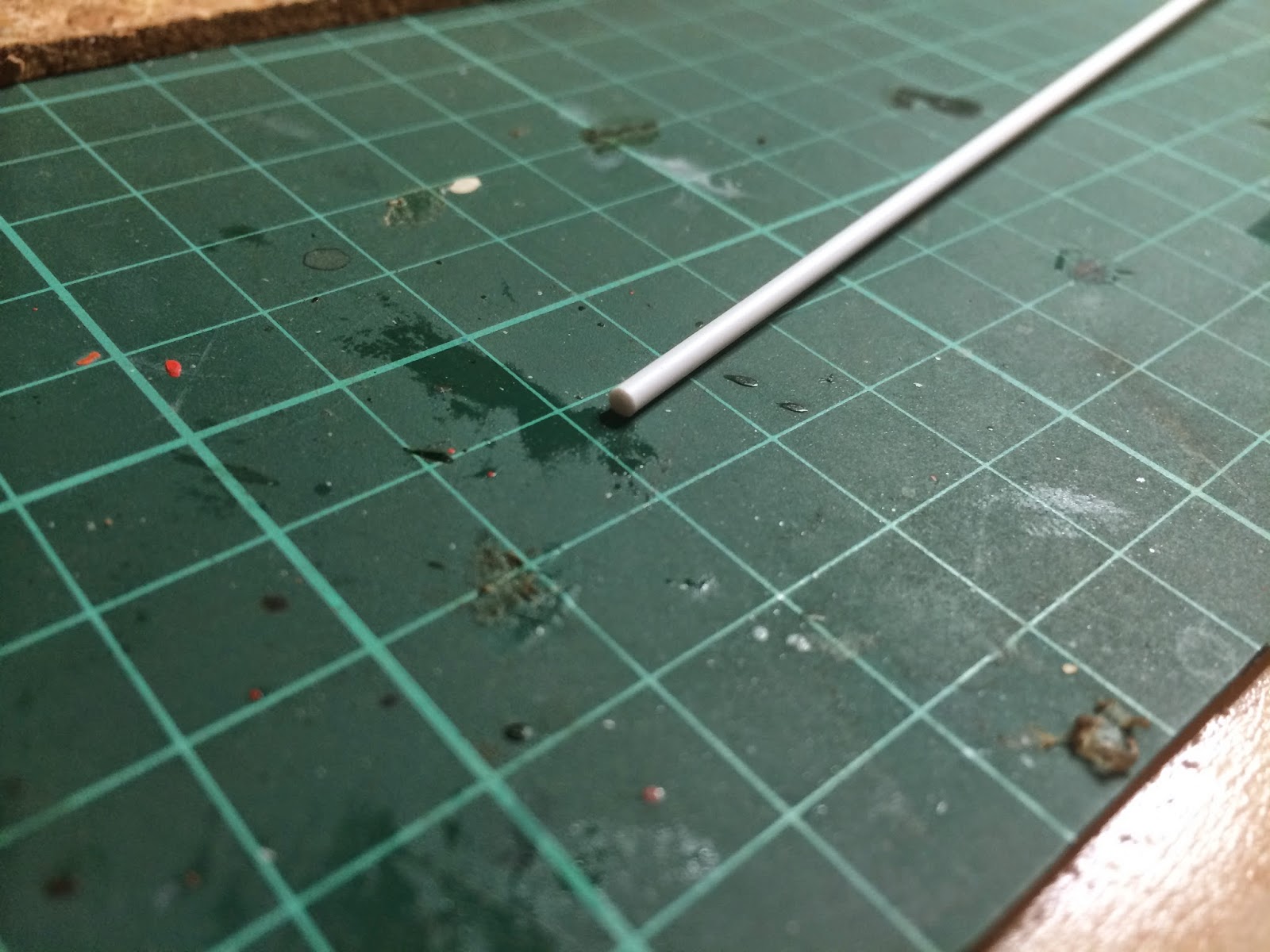 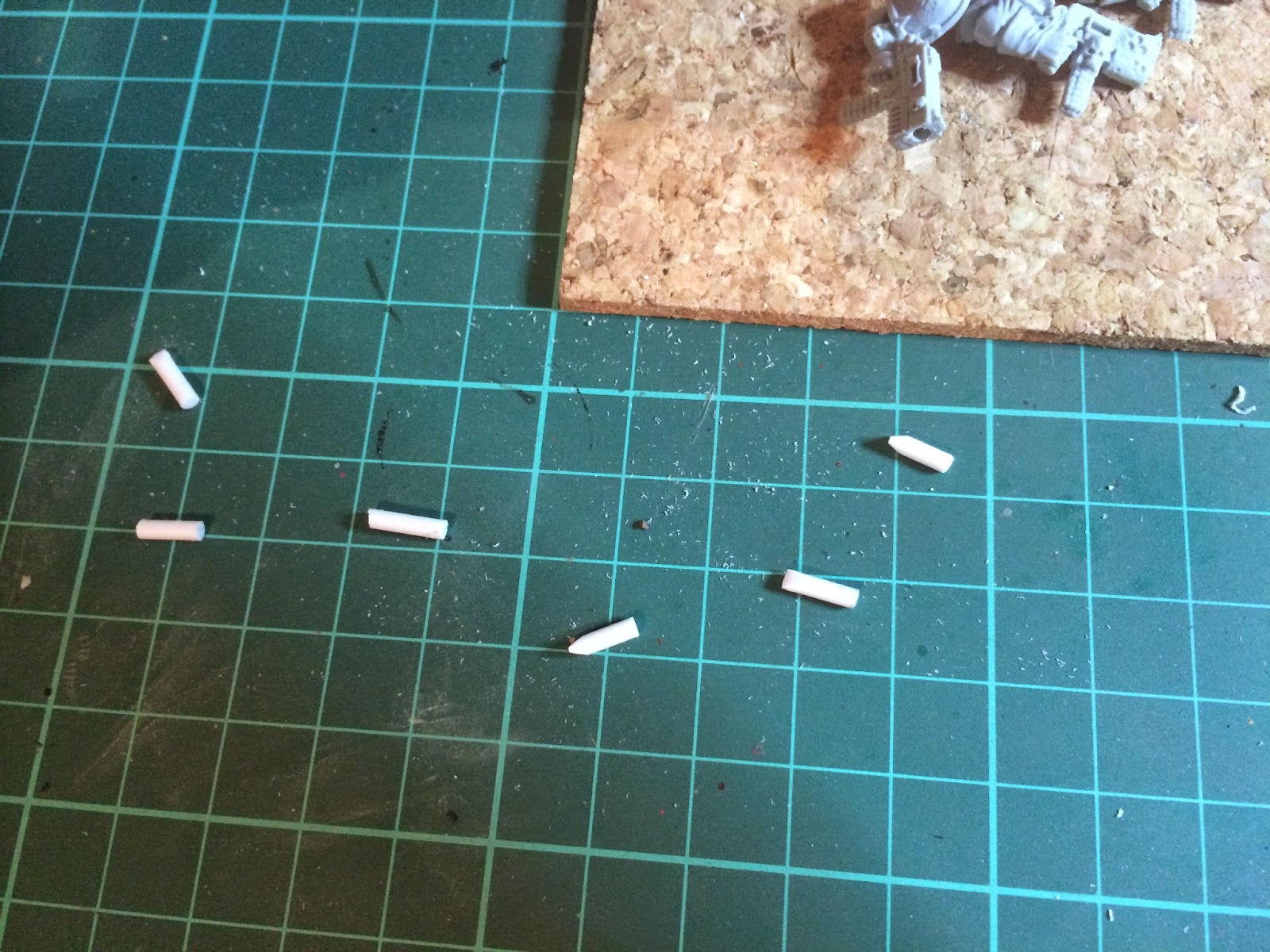 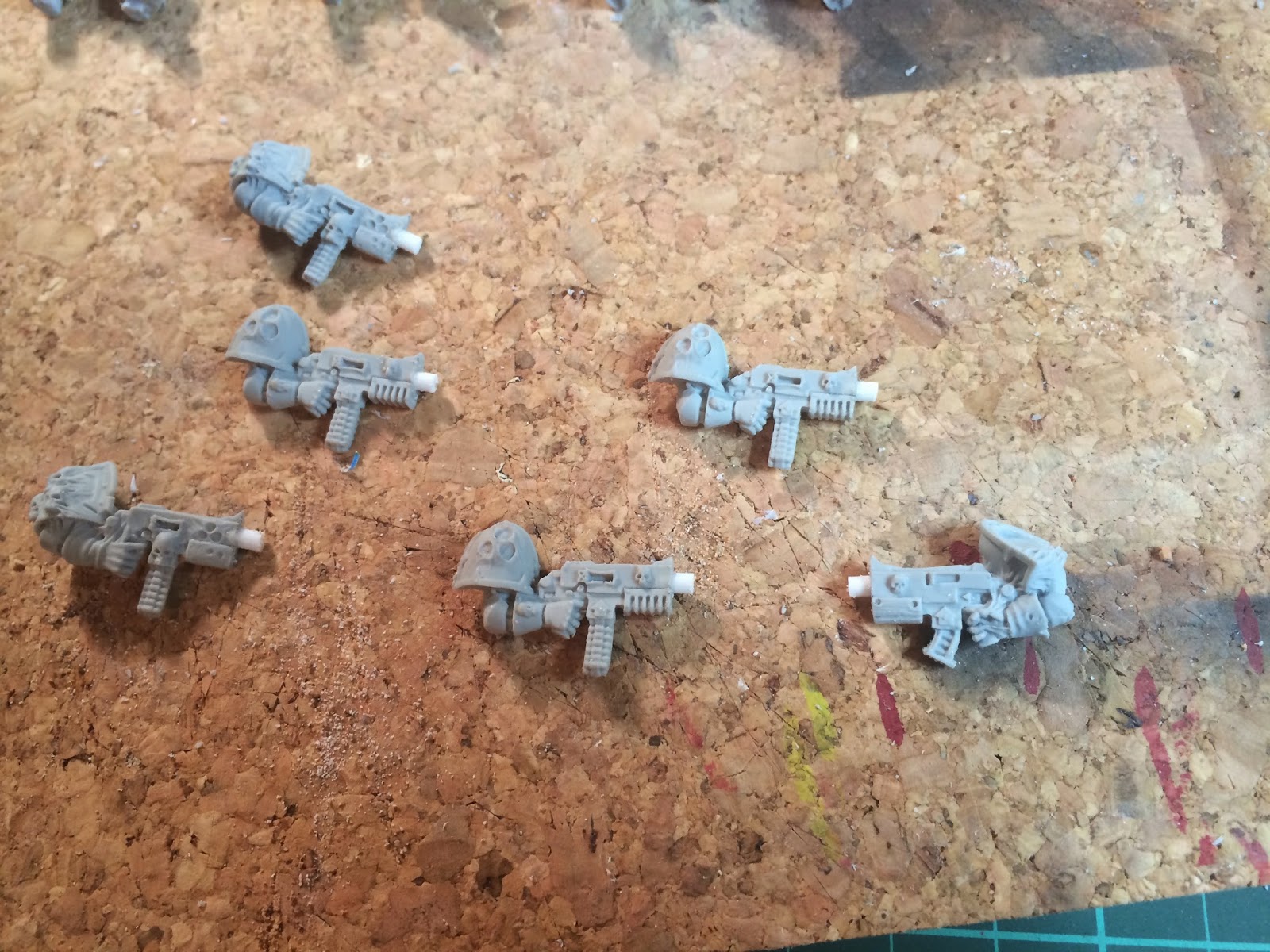 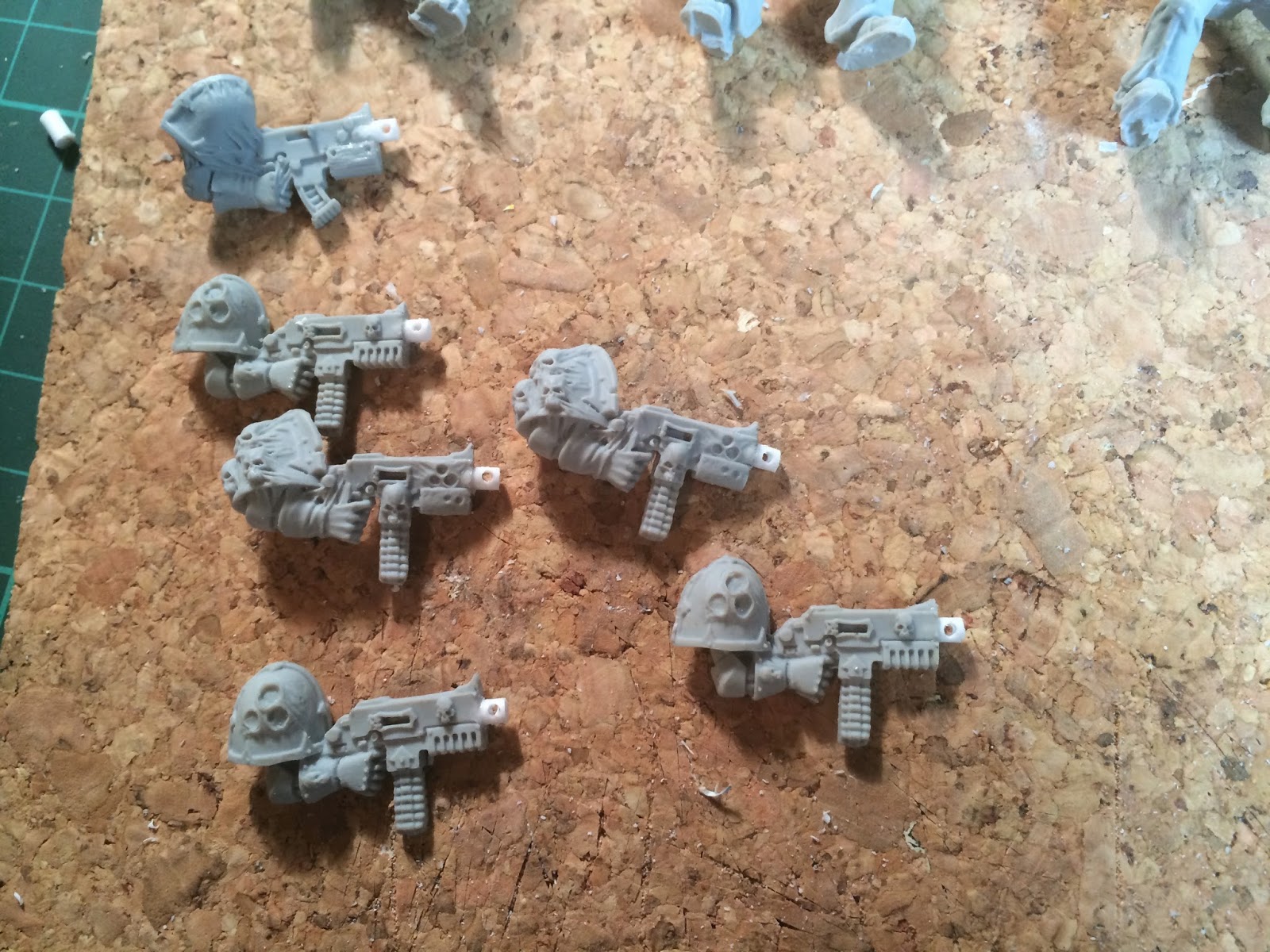 I want to give Typhon a very heavily weathered armour scheme. The idea I have in my dead is that he is on the Terminus Est and in the process of falling to Nurgle. I want his armour looking weather, worn and beaten up.

I have researched a few techniques on salt weathering. A technique long used by scale modellers to weather trains and scale models. I've never used it before and so wanted to test it prior to jumping on a nice forgeworld model.

I've taken a square of plasticard. Made sure it is nice and clean and given it a coat of Vallejo Grey Polyurethane Primer. 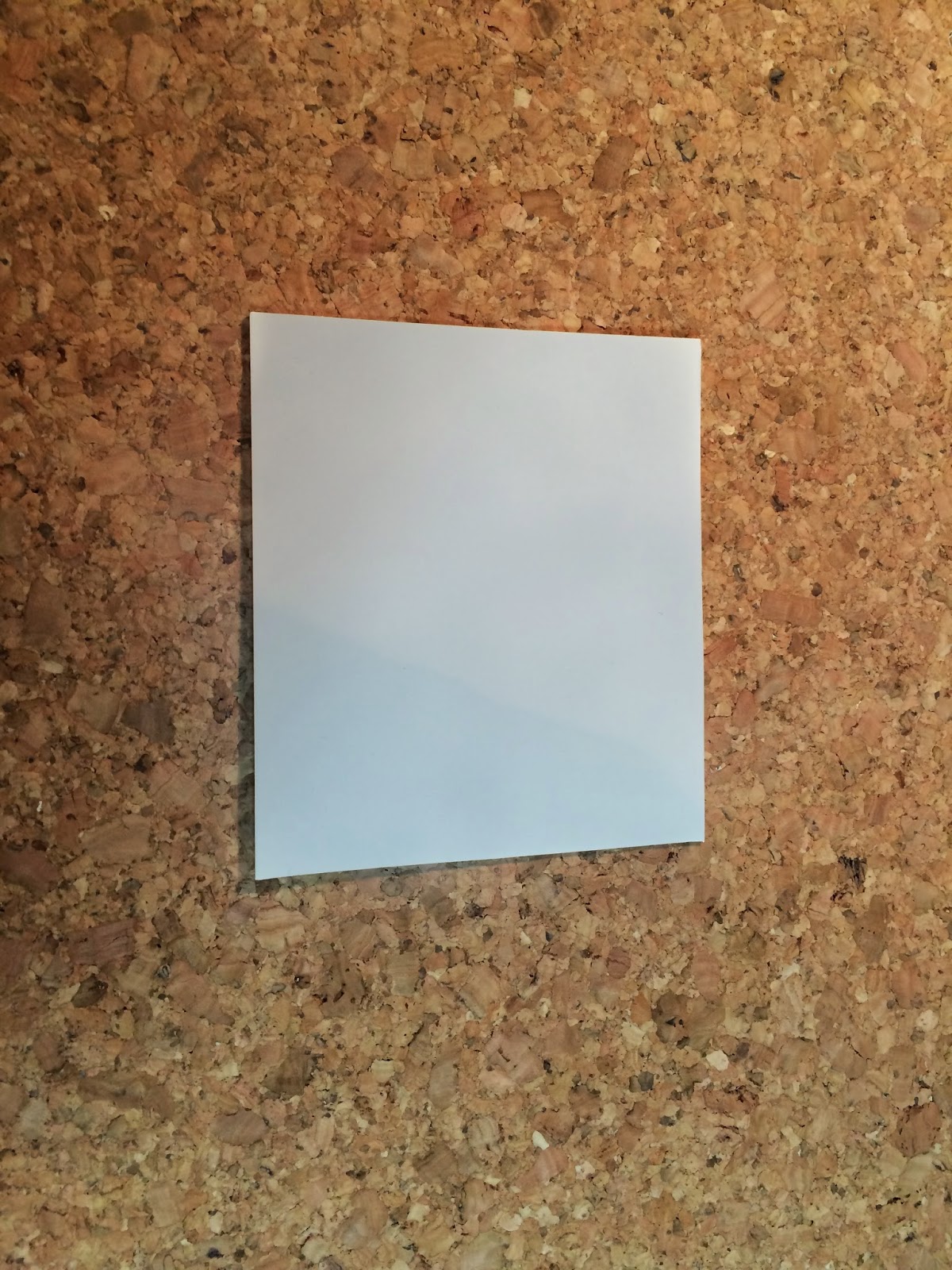 I wanted to experiment with which base colour came through the white the best so airbrushed onside with Vallejo Air Colour Rust and the other side with a mix of Vallejo Air Colour's Burnt Umber, Camo Light Brown, Olive Drab and German Grey. 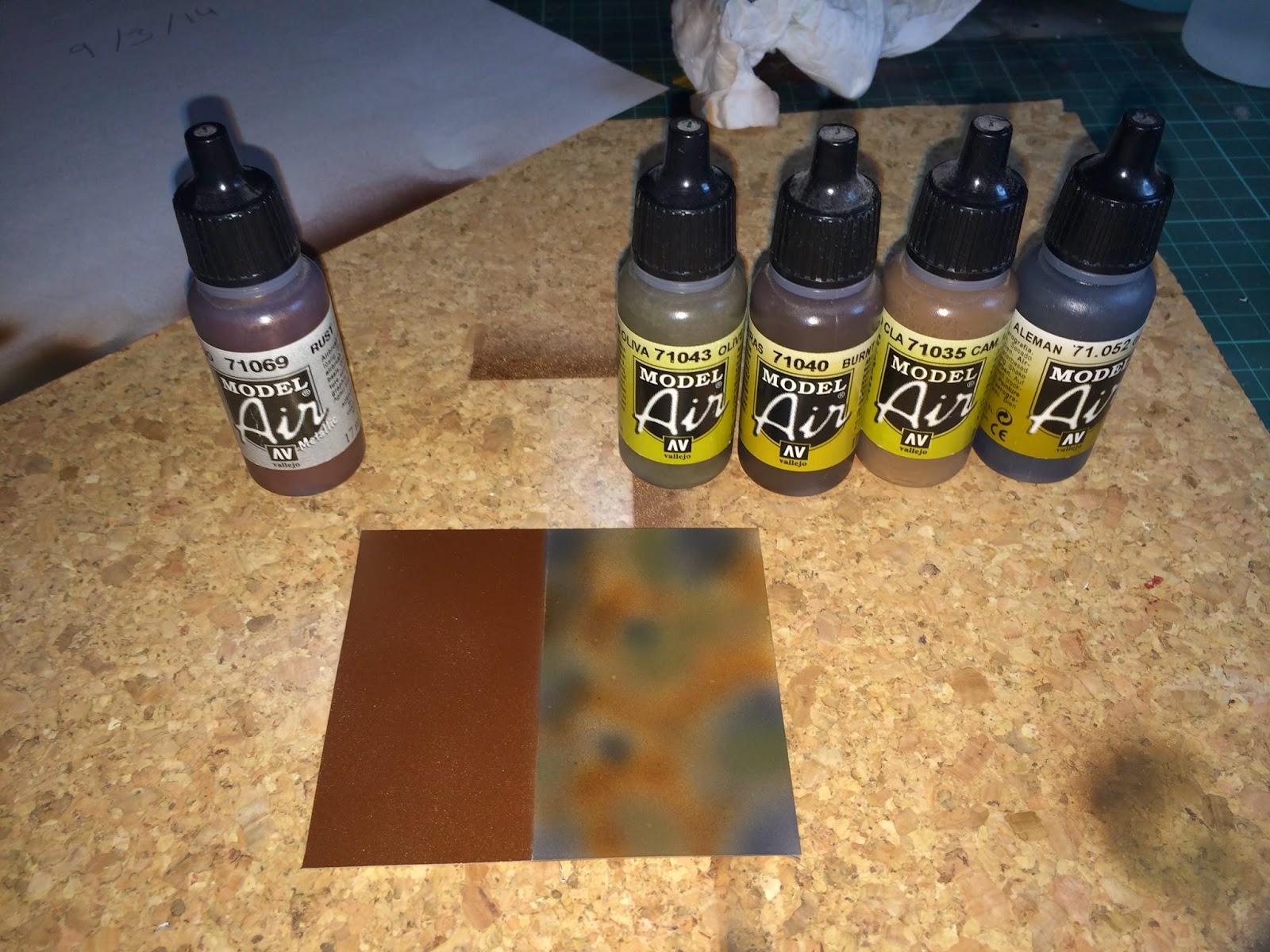 In order to protect the base layer from the next rather harsh step in the process I coated it several times in Klear varnish and waited for it to dry. 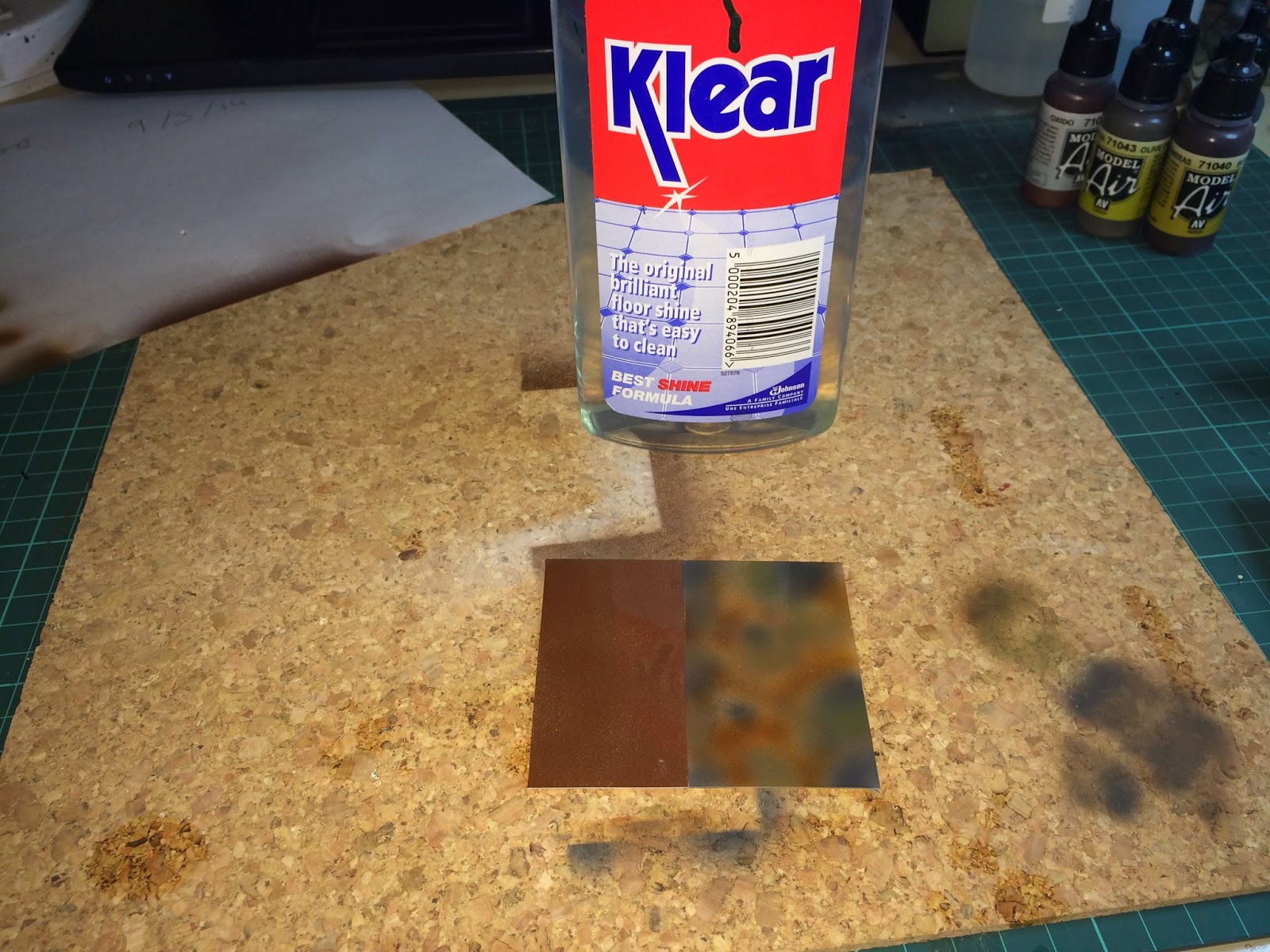 After that comes the Salt layer. Turning the base through 90 degrees so both colour schemes got both types of salt I sprayed a very heavy coat of cheap tesco hairspray over the plasticard. 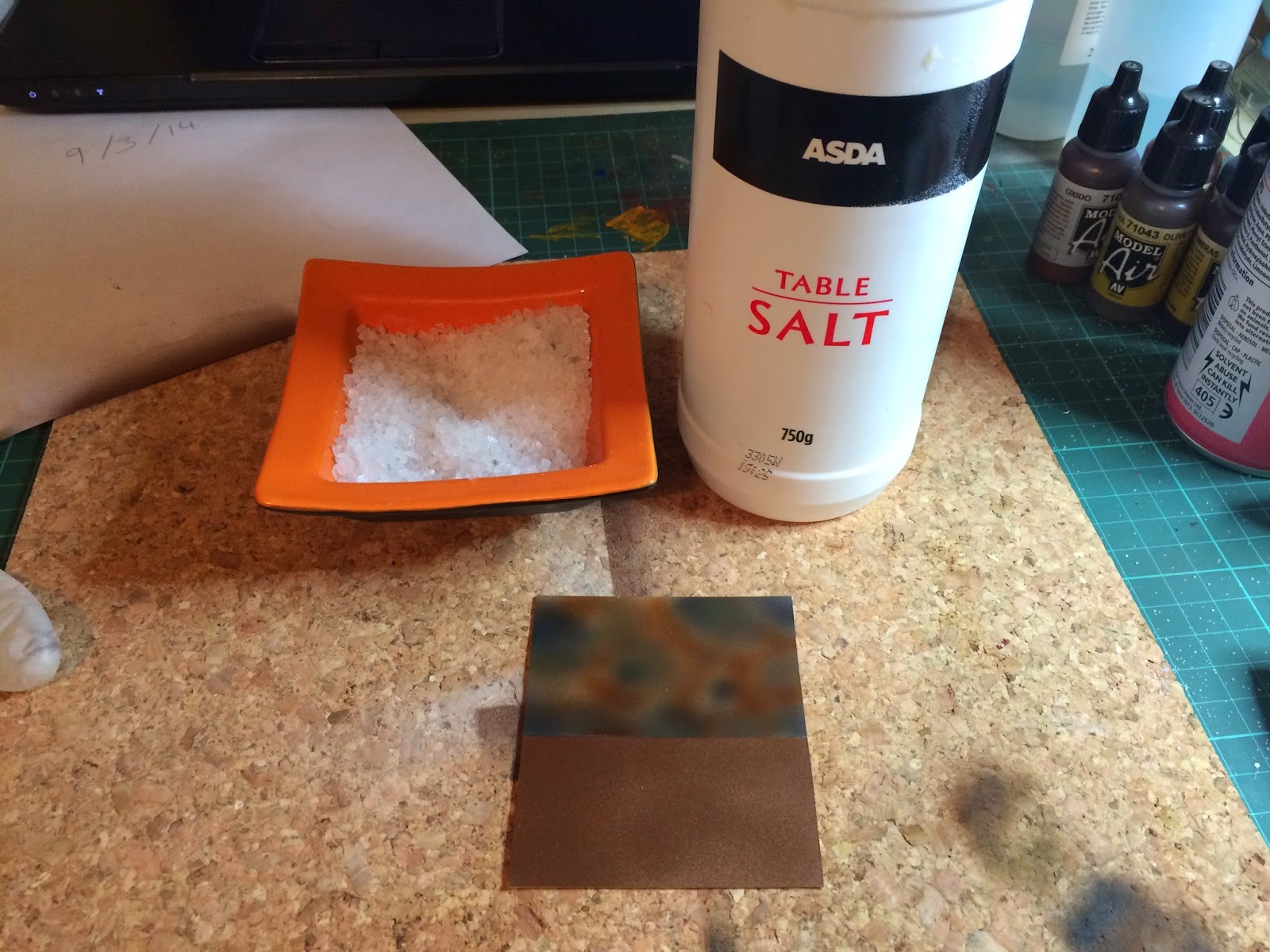 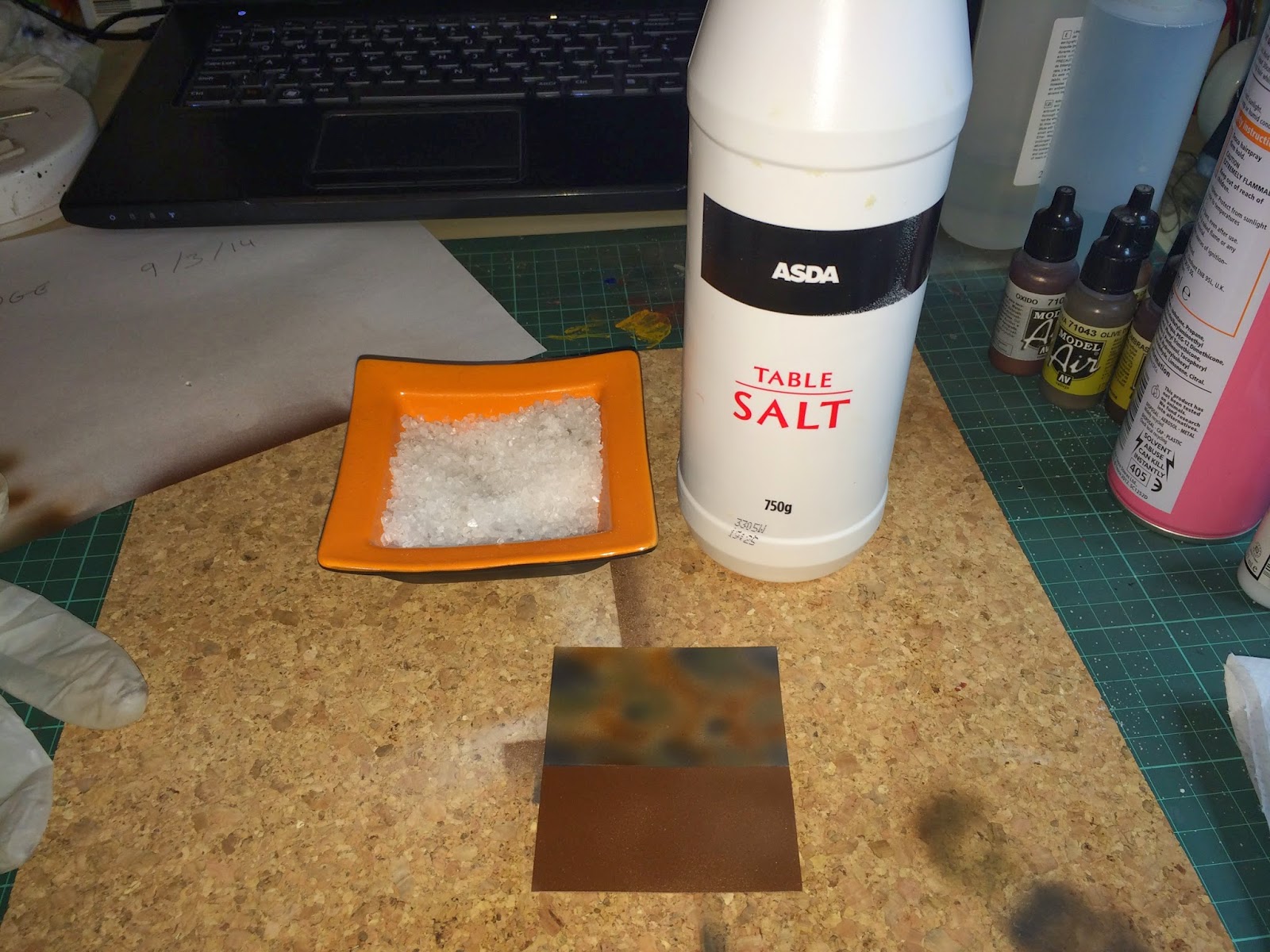 and then sprinkled regular fine table salt on one side and course sea salt on the other. 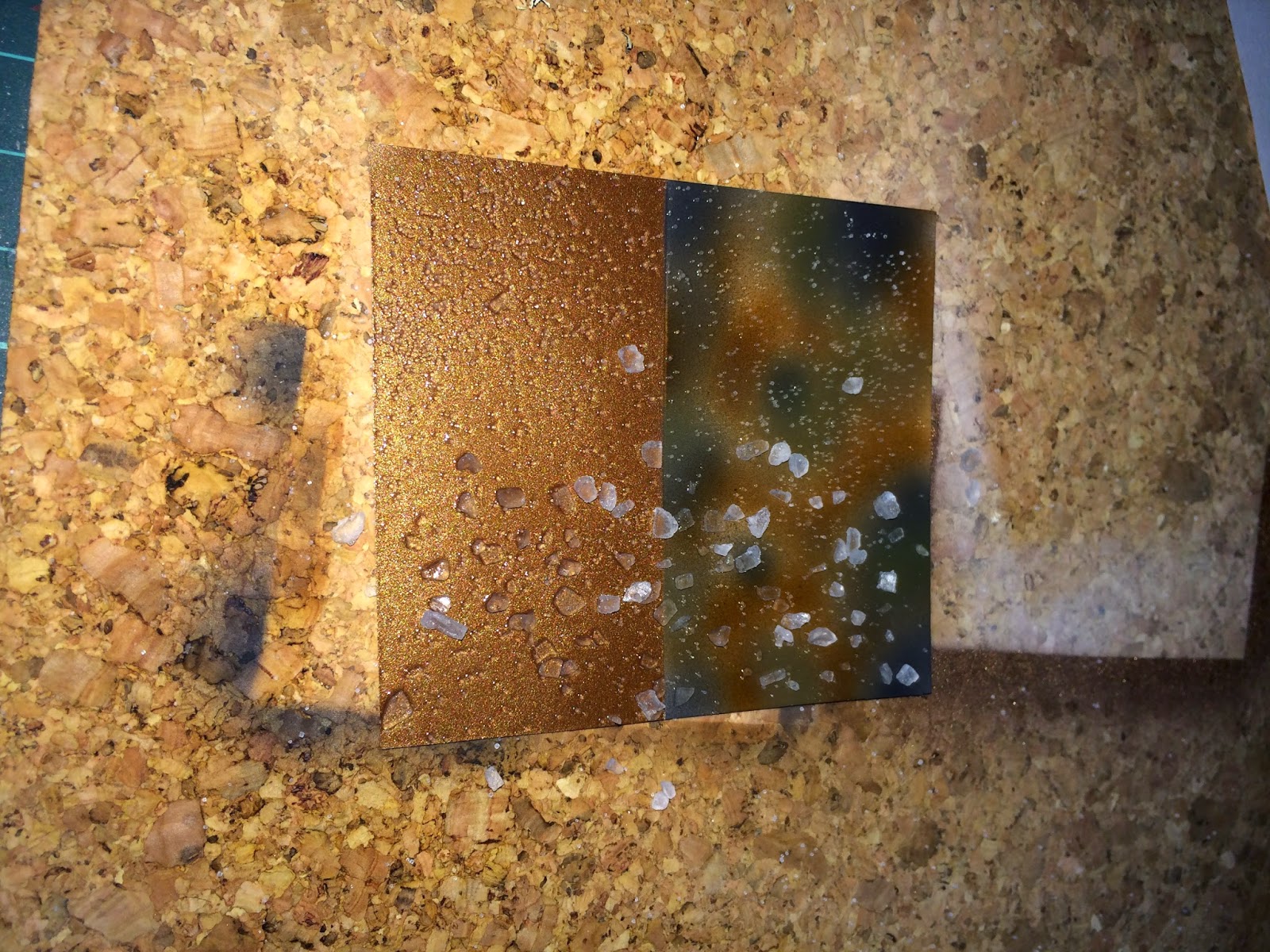 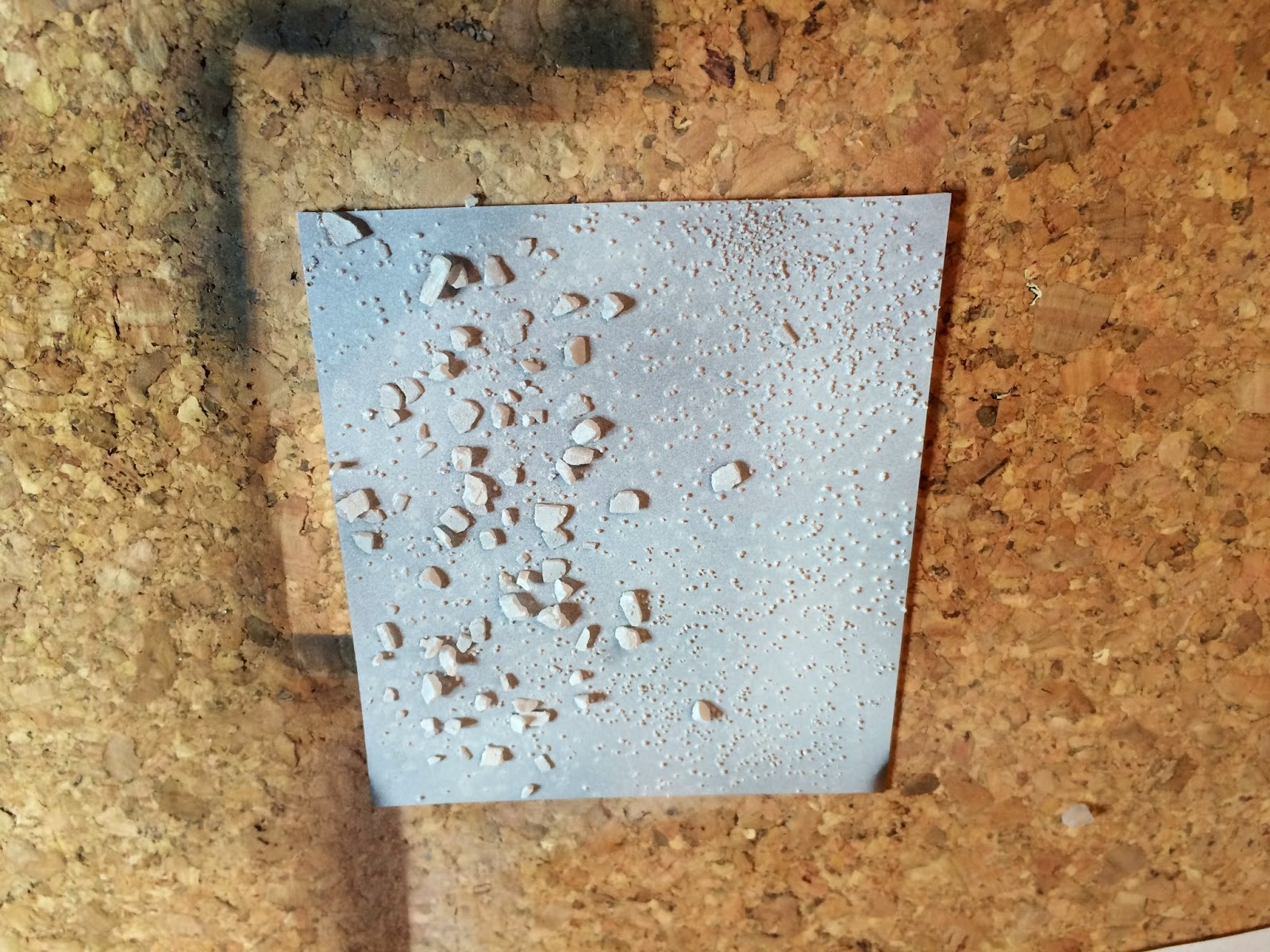 After this was allowed plenty of time to dry I then washed the salt off under cold water, gently scrubbing it with a very soft old toothbrush (my 15 month old daughters old baby tooth brush!). This has very soft warn bristles to only brushes off the salt and doesn't excessively damage the paint. I also scored a few lines with a toothpick to get a feel for how scratches would look. 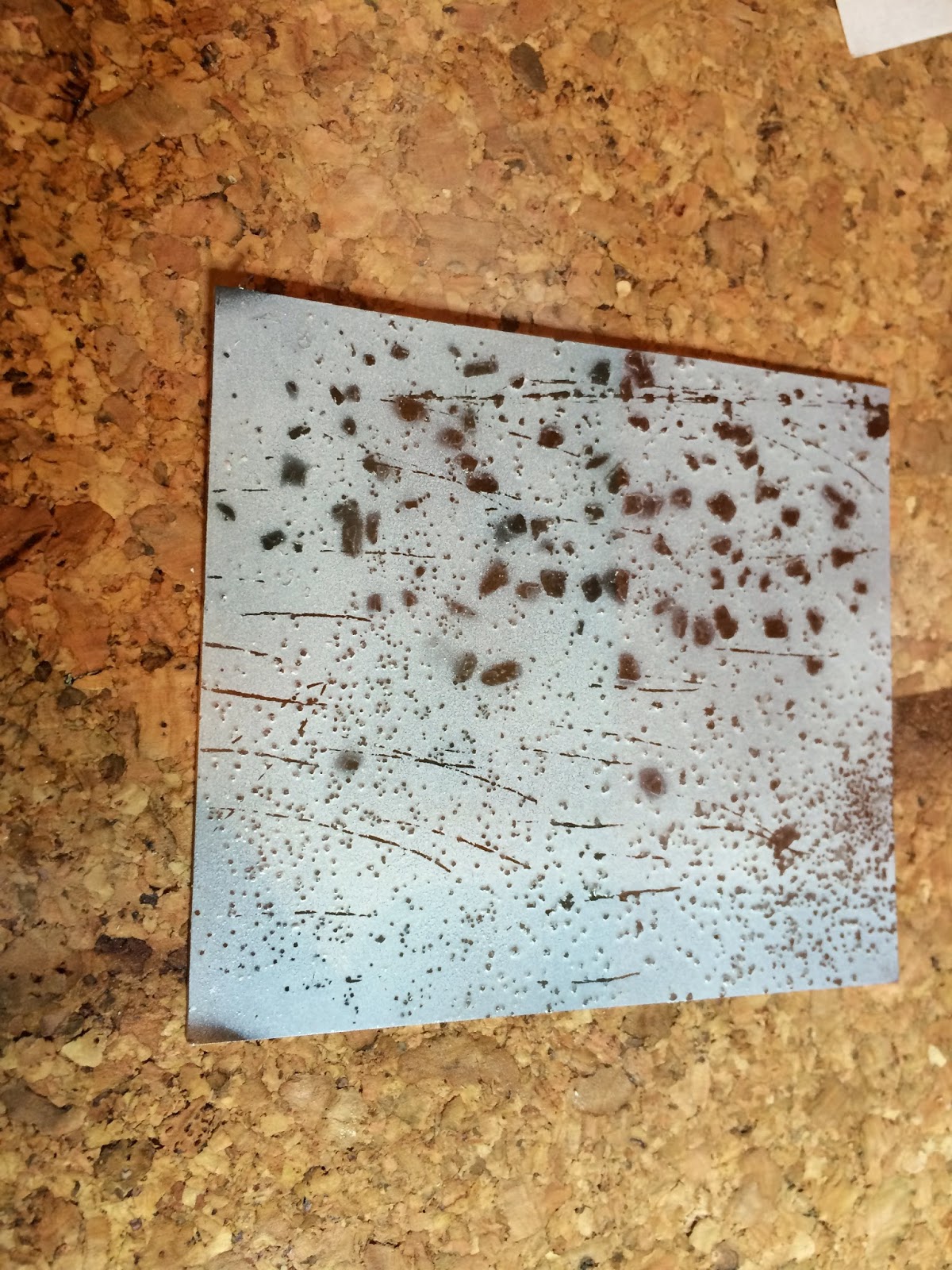 The effect looks good but is rather harsh so needs toning back. To do this I used a filter. Normally a filter is an extremely diluted enamel or oil medium however not having any white enamel or oil paints I improvised with an acrylic white filter made with a couple of drops of Vallejo Air Colour White mixed with a drop of flow aid, a drop of slow-dri and a lot of airbrush thinner. 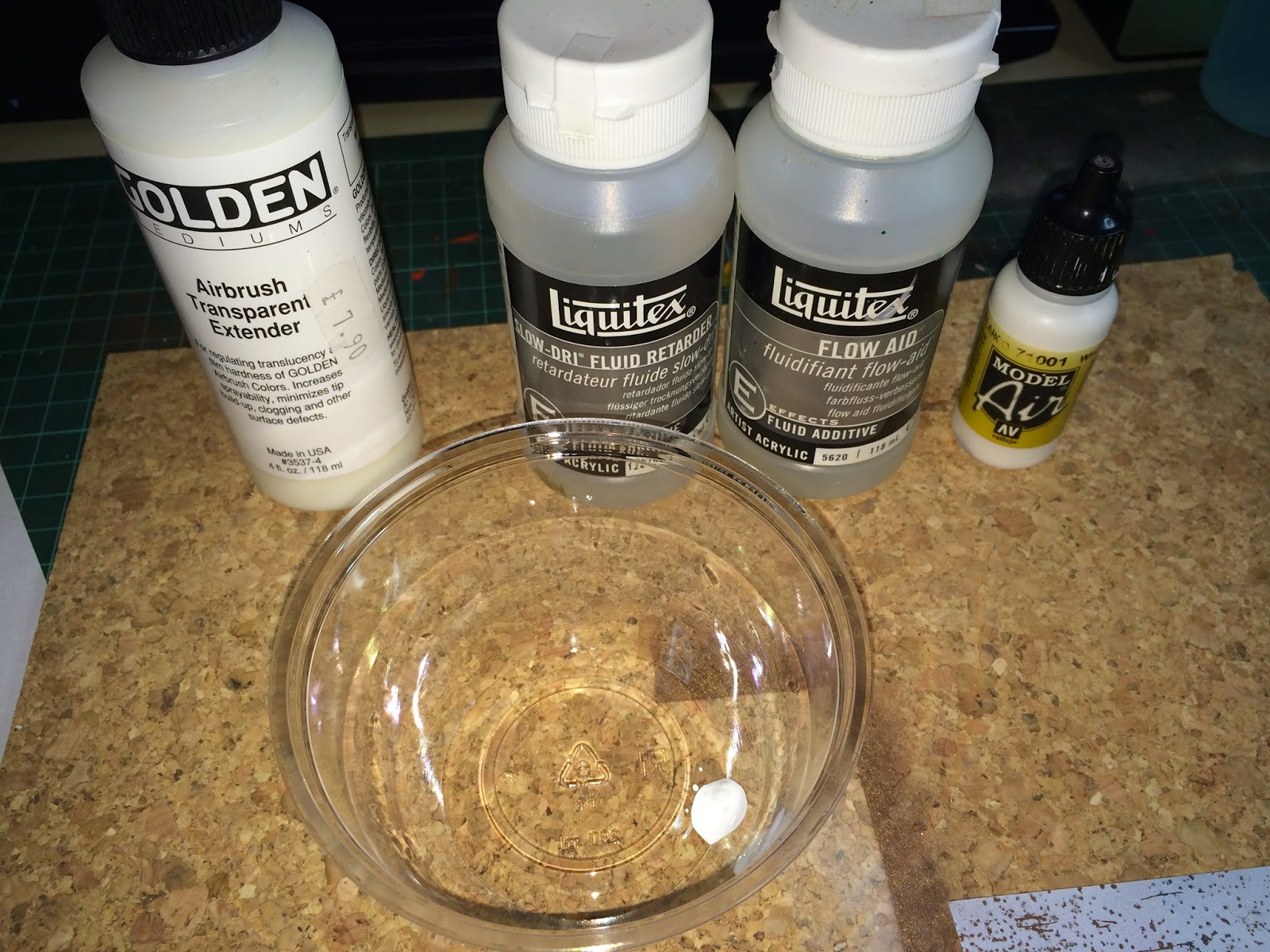 There is an old adage that paint should be thinned to the consistency of skimmed milk in order to airbrush it. In this case we are talking about what looks like slightly thick water! It really is very diluted so there is maybe one part paint to 15 or 20 parts thinner. 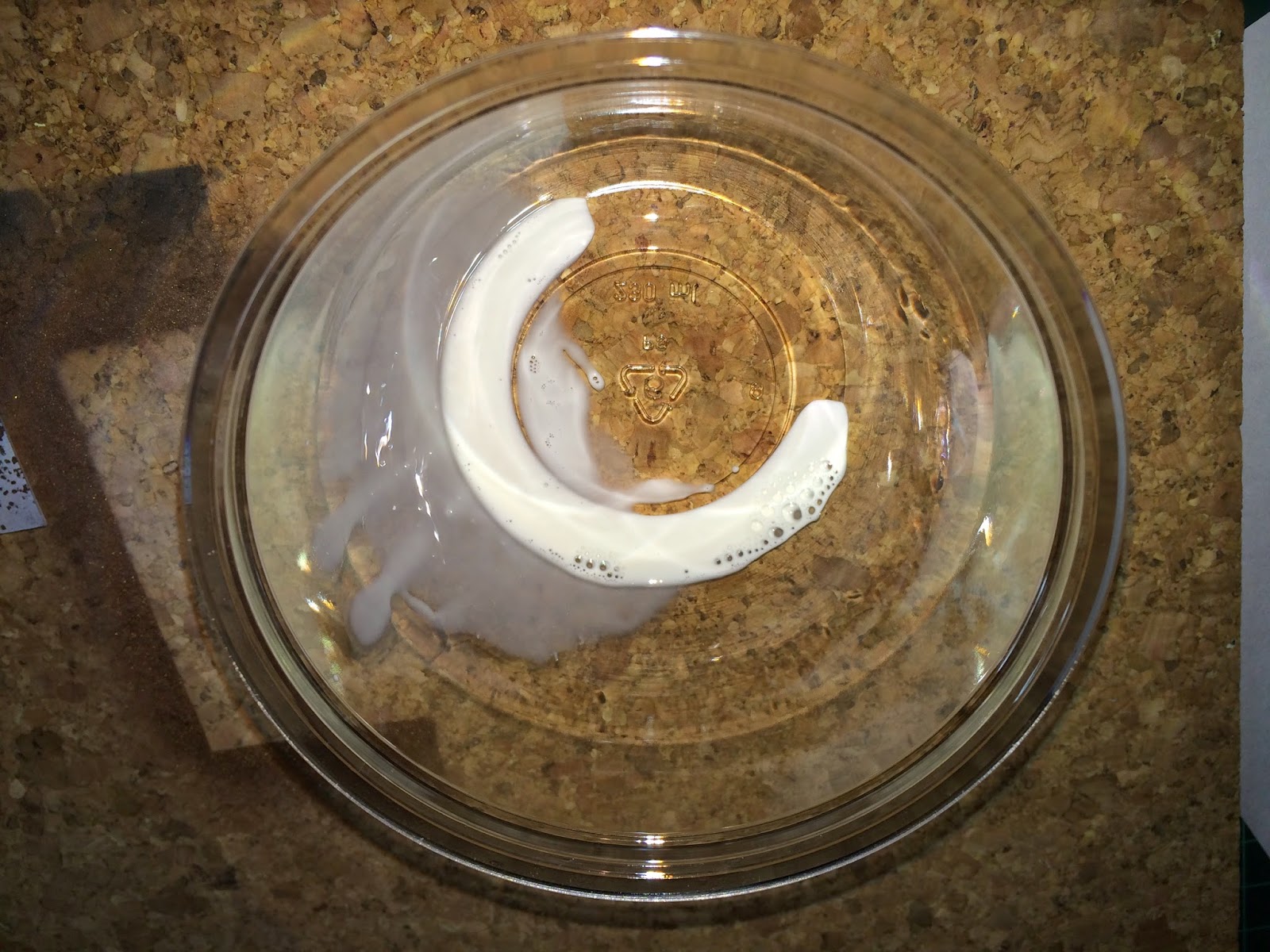 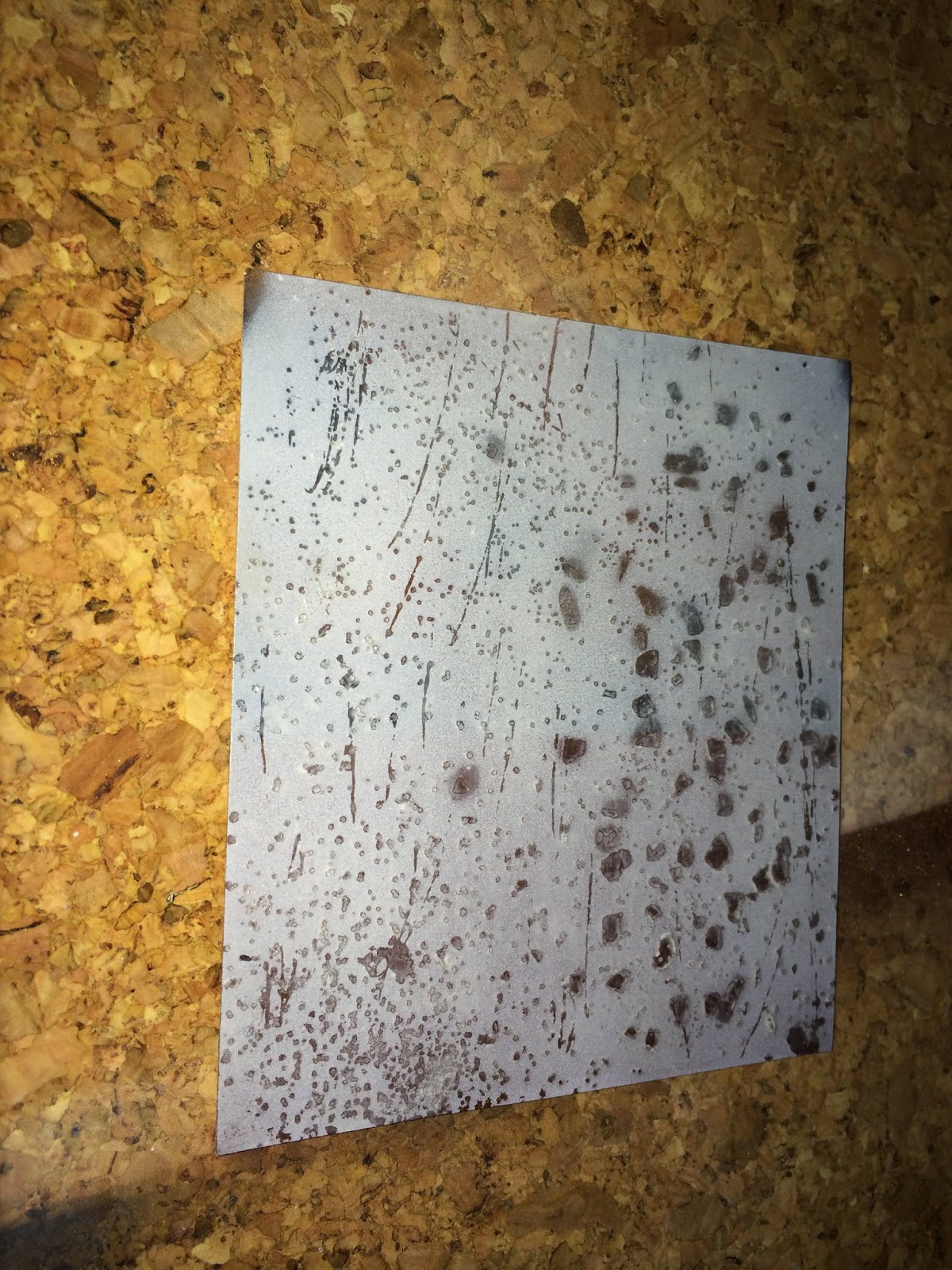 Using a piece of foam from an old blister pack which had pieces plucked out of it to give an uneven surface I blotted the card with the original base colours in vary levels of heavyness. 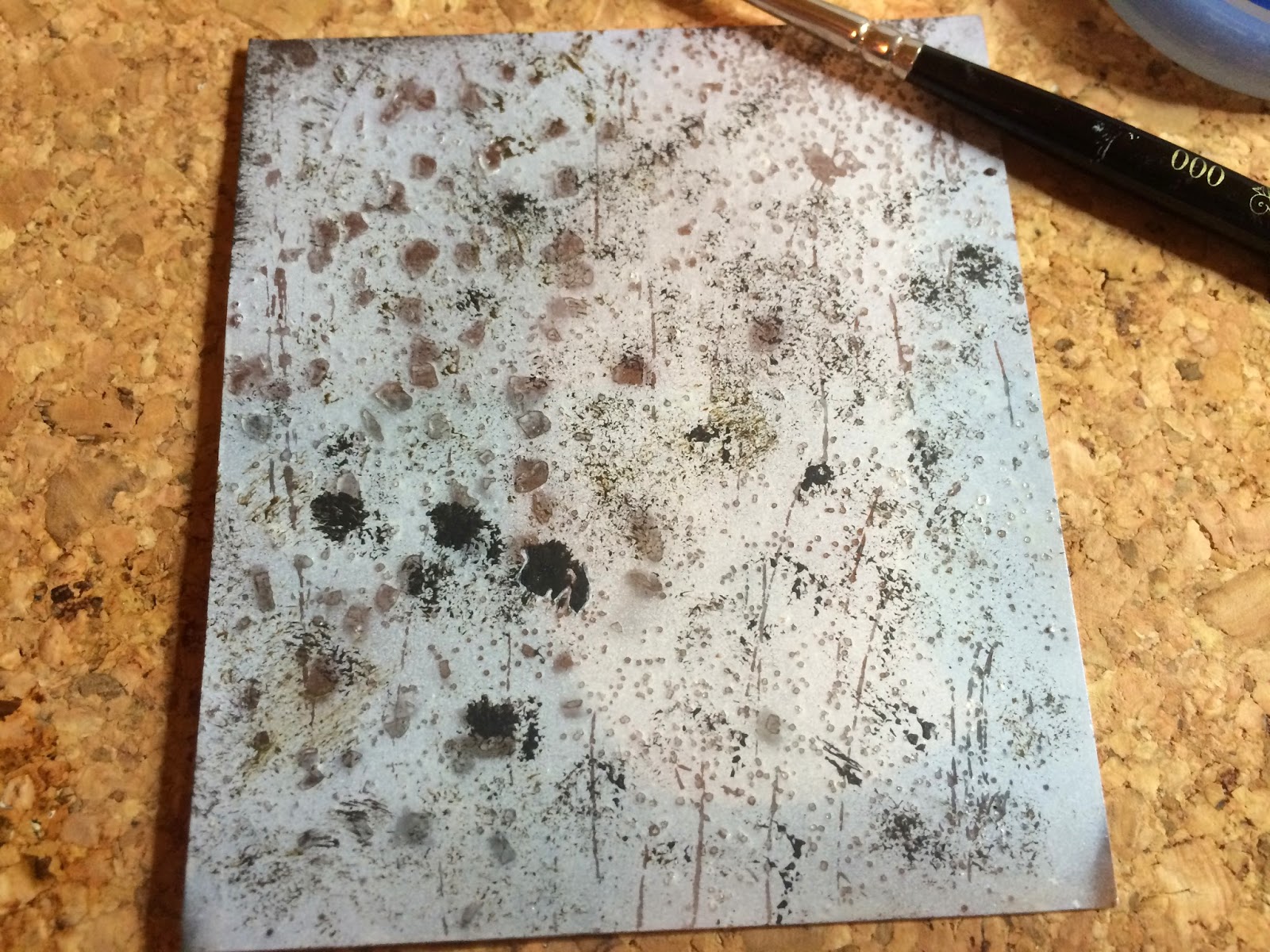 After that I edge highlighted some of the scratches to enhance the contrast and give depth to the weathering. 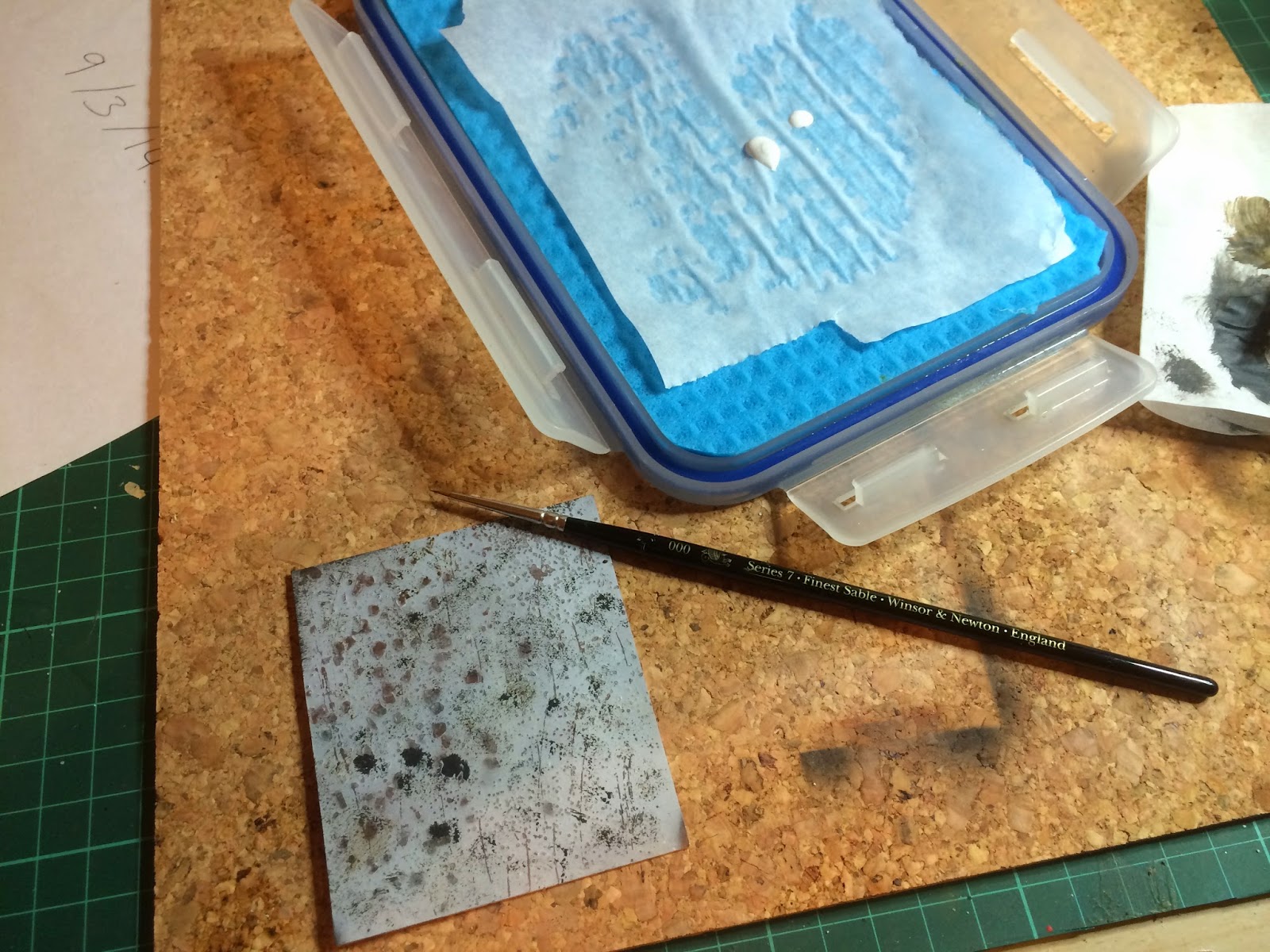 Once that was done I gave the whole piece another go over with the white filter for final effect. 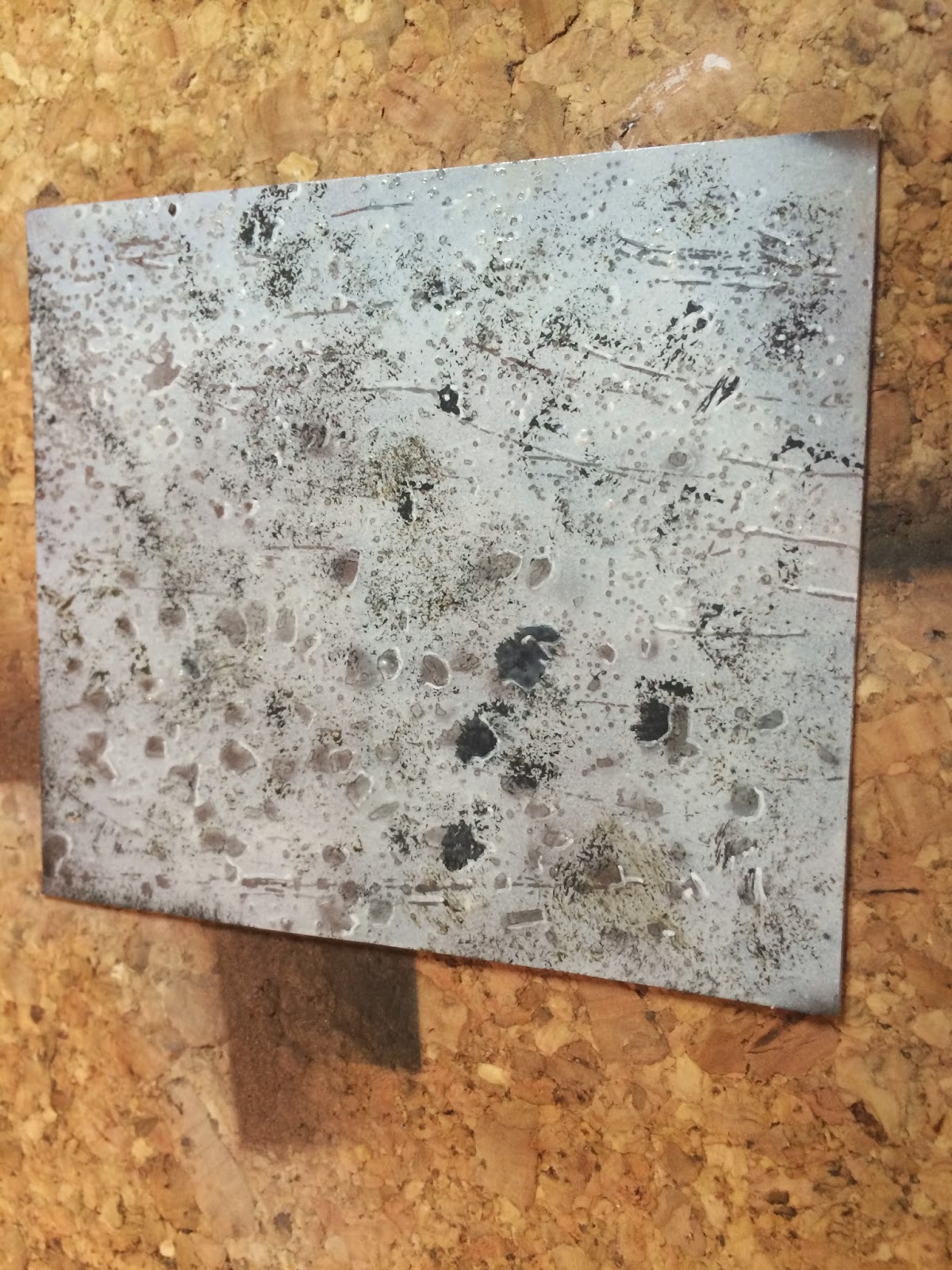 So what did I learn from this.

Well on the scale I am working on, using sea salt is going to leave much to large an area of the under colour. The table salt marks will scale down to Typhon much better. Also I need to pick up some white enamel paint and a white filter to give better results on the edge highlighting and the filters. The enamel paint will have a much longer work time and I can wet feather the edges of the white contrasting highlights to blend into the main base colour. I am going to try and pick up some AK or Mig chipping fluid this weekend from a local hobby store to try those and see how different the effect is. Will post another update when I have tried that.

If you have read this far thanks for sticking with me :) This was very much an experiment but one I am happy with. The test piece has way more salt weathering on it than I would use on Typhon but wanted to make sure the technique was valid....I think it is.

So work doth begin. 99% of the flash is gone as have all the gates. Has taken a fair bit of scraping and cleaning. There are a few places where the resin has bubbles or poured thin that need filling or reinforcing. I need to partially rebuild one of the week where the resin is pretty soft. Still needs a couple of once overs to make sure I haven't missed anything before a nice soak in some washing up liquid.

Fair bit of work required but a start has been made which is the important bit!